HOW TO FIND US

BELOW Tsar Putin with a close Friend from North Korea 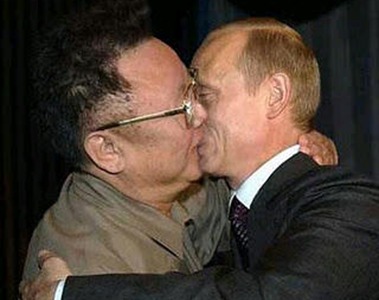 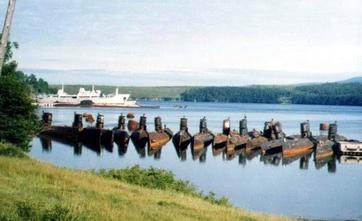 LOTS OF LINKS TO WOOP WOOP

HCTV attempted to get an opinion from Russtsar Supreme Leader Tsar Putin about this, however, Tsar Putin was awaiting his voice; Comrade Snowdin to Leak something once he's finished shafting Australasia.

Radioactive nuclear reactors are resting around the globe on the seafloor in derelict subs—some the results of accidents, some intentionally dumped. Whether they pose a threat to marine and human life now, or if they ever will, remains an open question—and one that may not be answered for another thousand years. The remains of two U.S. and three Soviet nuclear subs, including reactors and in some cases nuclear-tipped torpedoes, all rest in deep water on the bottom of the Atlantic; any removal efforts would be extremely difficult and costly. The Russians also dumped a number of old submarine reactors in the Arctic Ocean from about 1960 to 1990. They lie at depths from about 40 feet (12 meters) to 985 feet (300 meters). While this would seem dire, experts say the chances of harmful radiation leaks are slim. In addition to thick metal shielding around the U.S. reactors, the radioactive fuel rods are encased in an alloy that corrodes extremely slowly. Even if the reactor shielding were ruptured, the alloy should keep seawater out of the rods for centuries. Within a thousand years, most of the radioactive material will likely decay before it is released. Soviet and Russian reactors have similar safety features, and nuclear-tipped torpedoes also have protective shielding. Unsettling Uncertainties Seafloor reactor sites and surrounding waters are periodically tested for radioactivity levels. Mildly elevated radioactivity has been detected at some sites but not at levels that appear dangerous. The safety features seem to have been effective so far. Nonetheless, some environmentalists are concerned that the sites pose significant threats, because no one can rule out the possibility of harmful leaks now or in the future. While it is possible that released radioactive material would be confined to surrounding sediment, some spreading is also conceivable. Either way, marine life could be contaminated, as could humans who eat contaminated seafood. Based in part on such concerns, most of the Russian nuclear submarine Kursk, which sank in 2000 in relatively shallow water (350 feet/107 meters), was raised last year. Radioactive Graveyard Most agree that a more immediate and dangerous threat than reactors on the seafloor is reactors in inactive submarines docked in Russia. Dozens of subs with radioactive fuel are deteriorating in port, and the Russian government cannot afford to dispose of them. The U.S., Norway, and Russia are currently working to fix the problem in an effort called Arctic Military Environmental Cooperation.